Almost a month ago (July 6-8) we had our first house guests in our new home.  They are such fun three (and-a-half) year olds.  I think they left wanting more.  Which means they will be happy to come stay again!

They arrived and I showed them where to find the toy box in this house, and we had our was-a-stove-box-converted-house ready for them to play in.  G3 said, “We love ours house in yours house, Marcia!”  Yay a successful play-house.

Here is a picture of them playing with the toys from the toy box, the hand-cuffs are from our Halloween costumes when we were prisoners.  (We keep the other set out of reach of children, thank you very much.)  At some point during this playtime, G2 told us, “Daddy smokes.  I like him smoking.”  Her daddy does not smoke. 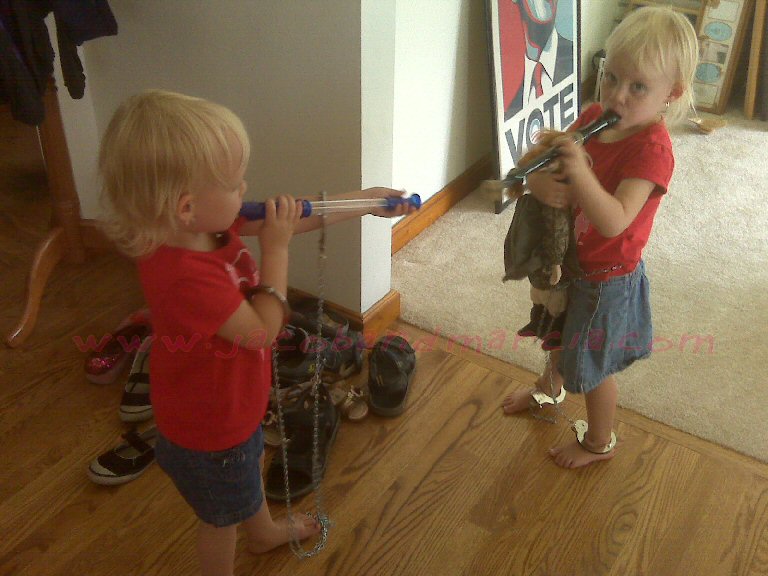 First item on the schedule was to get in the car and travel to a drum corps show.  G3 fell asleep in the car before we left town. 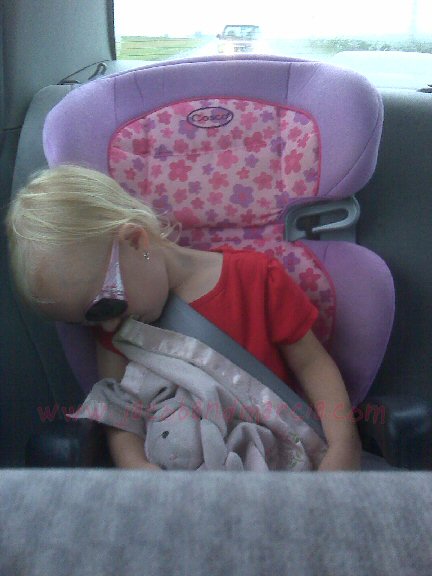 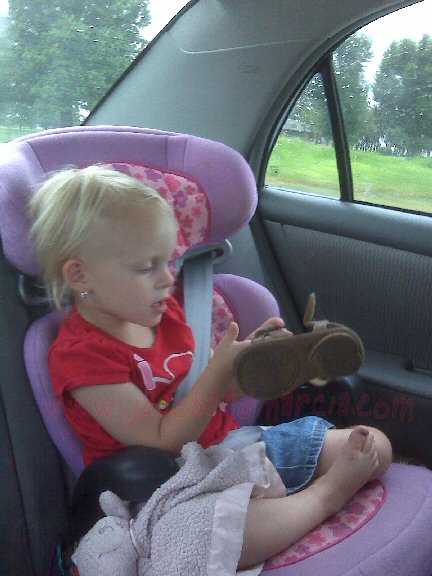 Then not ten minutes later she did not answer when I asked her a question, and this is what I saw. 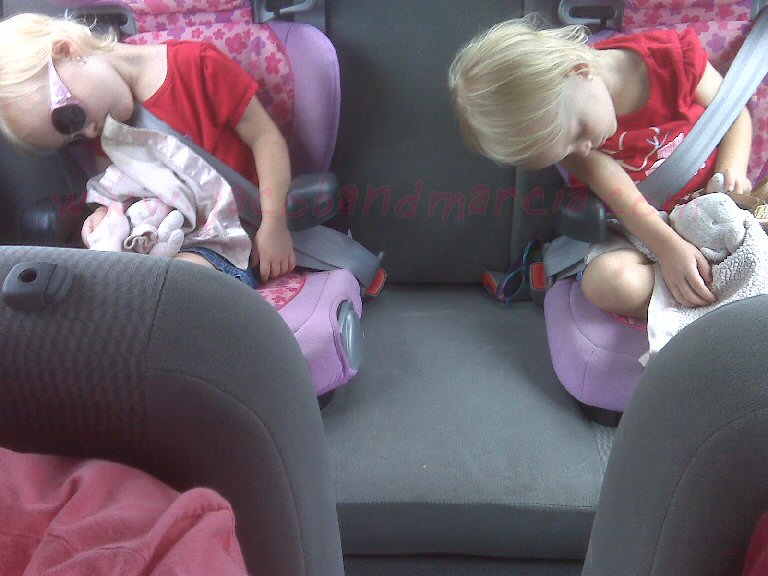 It was raining when we got to the show location, and we were hoping that it would have stopped, so while the girls and I sat in the car and ate the food we brought, Jacob went to see if the show was going to be cancelled or moved indoors.  (We had already purchased our tickets.)  The answer was that it looked like the rain would stop soon, and we would wait and the show would just be delayed a bit.  So, we went in and waited under the shelter of the bleachers.  We had to entertain ourselves.  Only when making this post did I notice the sunglasses; I did not see them like that when this was taken. 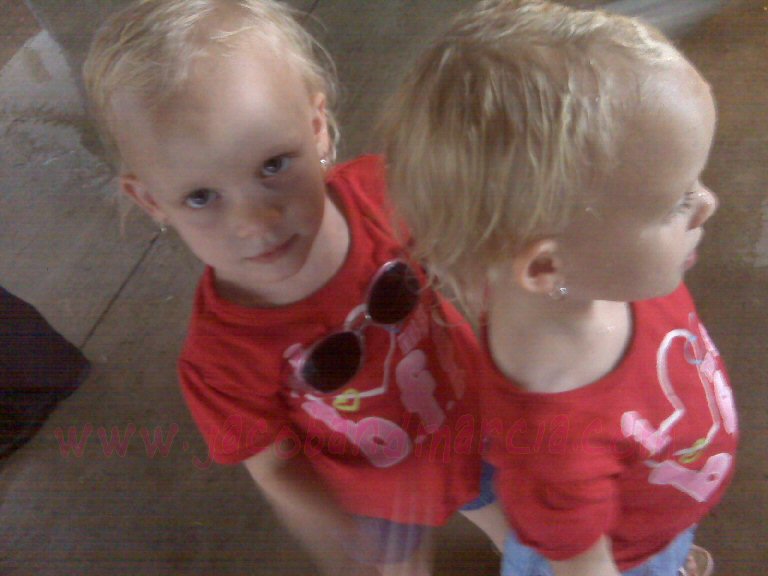 G3 helped G2 fix her skirt (which is a very cute skirt, btw). 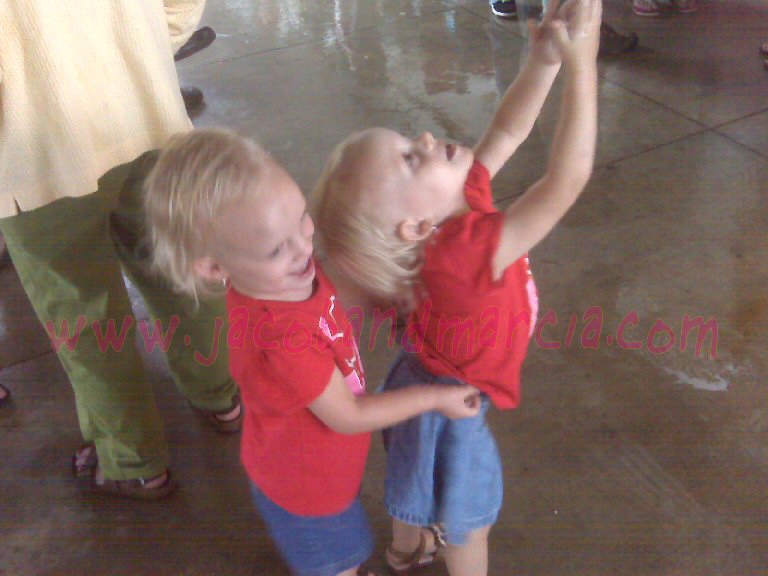 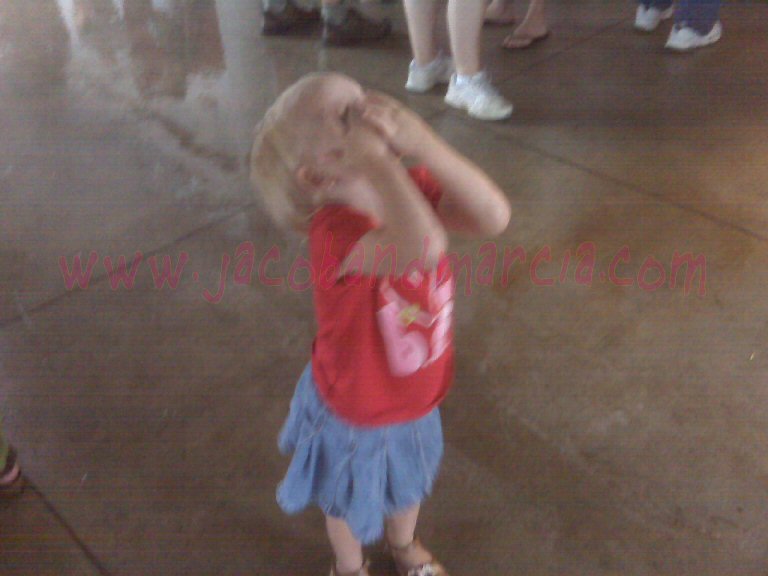 G3 wanted her picture taken too.  And just so you know, that is not a tear under her eye, it is a water drop. 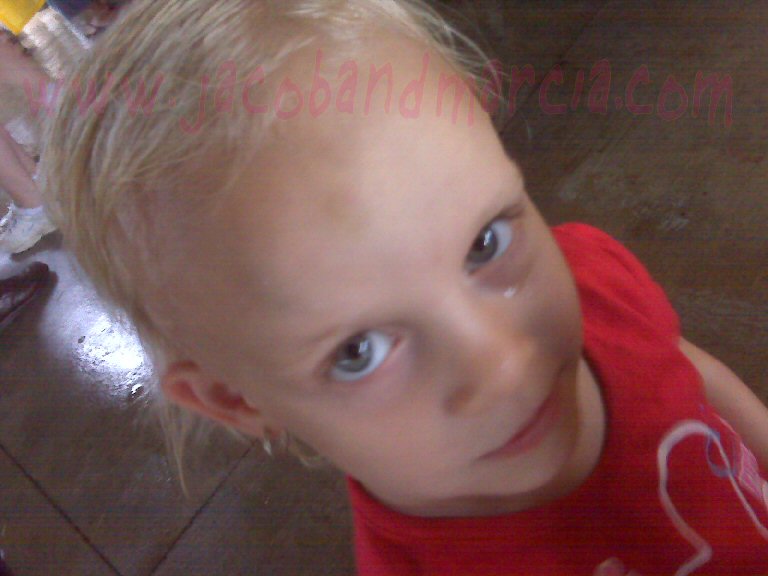 Here is G3 sitting on Jacob’s lap watching the show. 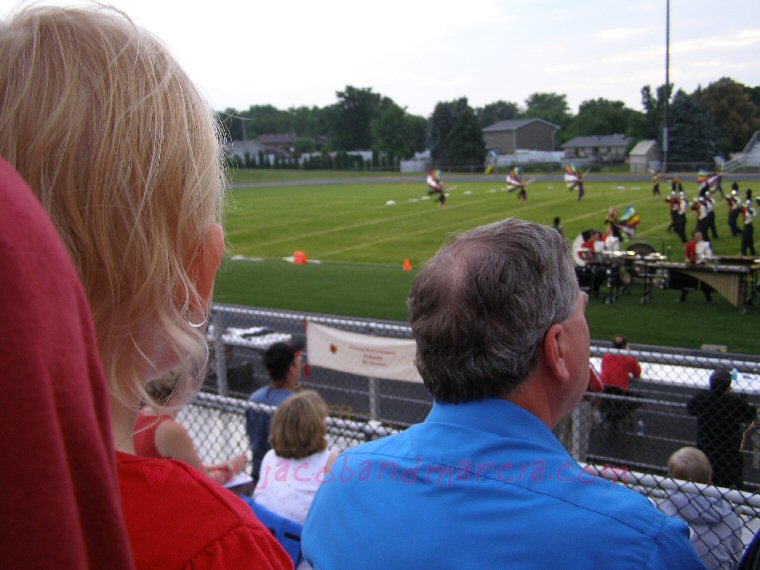 Here is G2 sitting on my lap watching the show.  After a while, she wanted to switch places with G3 because 1) the guy in front of us was very VERY tall and 2) my lap was/is not as big as it used to be, she had to share with her unborn cousin. 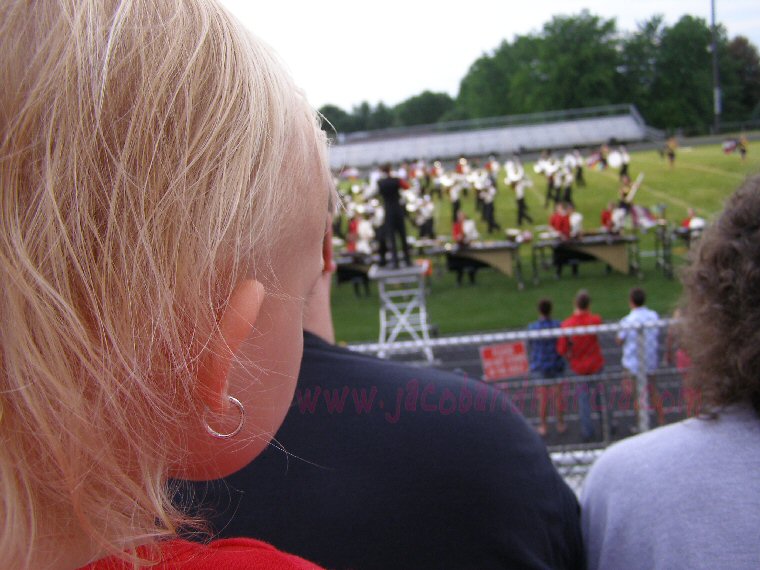 Here is a picture of the first corps that performed.  They won their category/class.  And as a special treat that guy there in the front ensemble is/was one of Jacob’s pitt students.  We are proud of Jason, he played good. 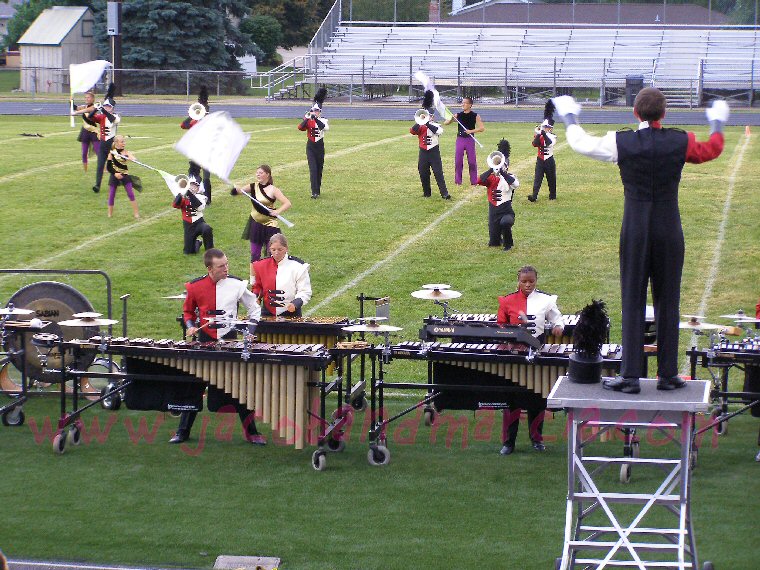 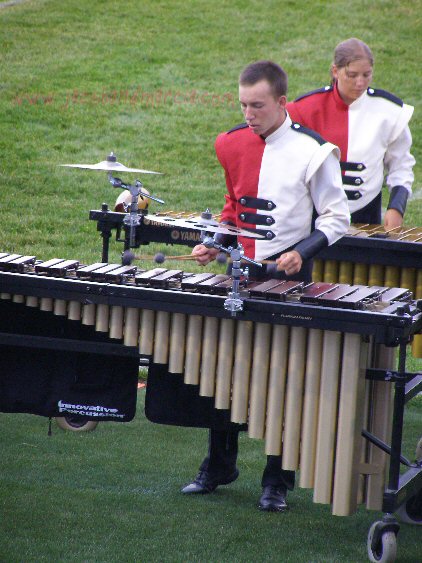 We enjoyed this pretty sunset over the performances. ( I just realized that could mean that we preferred the sunset, that is not what I intended to say.) 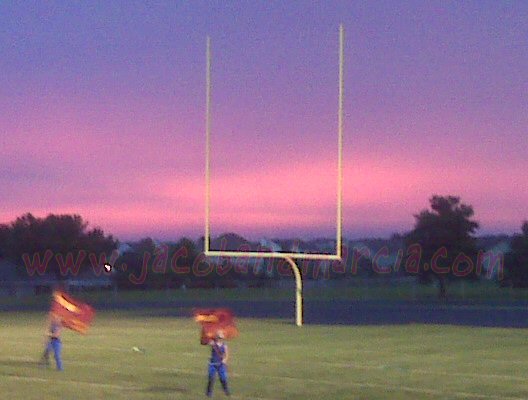 We had arrived right as the show was supposed to start, and we could not see the corps busses.  We had brought a lot of fruit with us to donate to Jason’s corps and we did not want to take all that fruit home with us, lest it go to waste.  So when the shows were all done we drove around and found where the corps buses were parked, and Jacob went in search of someone we could give the fruit to.  This was after 10 pm and the girls were tired, but very well behaved.  In fact, all the people that were sitting around us were very complimentary of how well they behaved and were impressed that they watched the shows.  G2 at one point told mee that one of the corps was going too slow and needed to be faster and louder.  Both girls were in awe of the flags (color guard).  If there had been any souvenir flags they would have been able to go home with their very own flags.  Fruit delivered, and we started our two-ish hour drive home.  They fell asleep in the car pretty quickly.

The next morning while I was walking (the girls were still asleep when I left, but insisted that they go walk with mee the next morning) Jacob got pancakes going.  After breakfast, the girls took a BUBBLE BATH in my “tiny tub.” 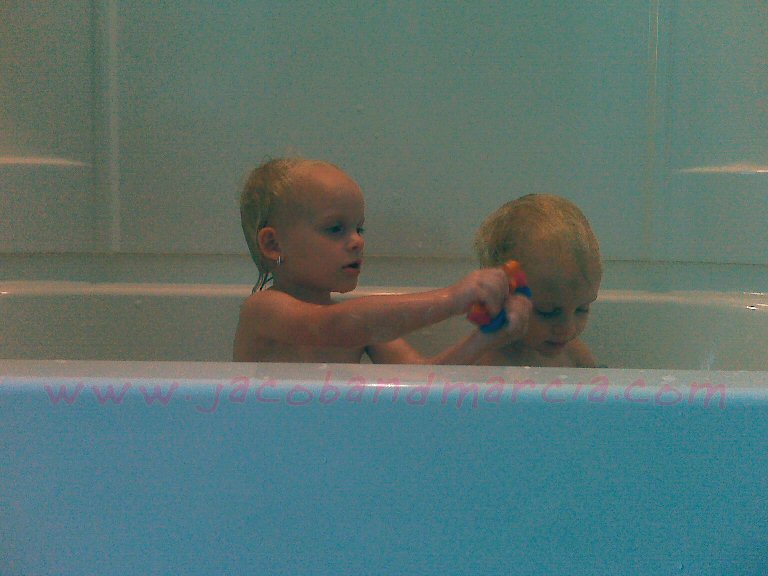 While they were in the tub, their happy-things took a bath too.  A very much so needed bath.  Don’t tell Ronda that I let them have Happys with them at the drum corps show, but I did and they dropped them a number of times in the rain puddles, and may or may not have dropped them on the floor in the (public) bathroom when they took turns before getting back in the car to head home.  Once it was clean, G3 told mee that she was unable to chew on her happy because it was clean.  She makes me laugh!

After the bath they wanted to watch a movie in “ours house in yours house.” (Jacob thinks it is funny that the first thing they did when they started playing with the house was to find the object that was too big and try to get it in the door!  We all do it at least once with our own homes, right?) 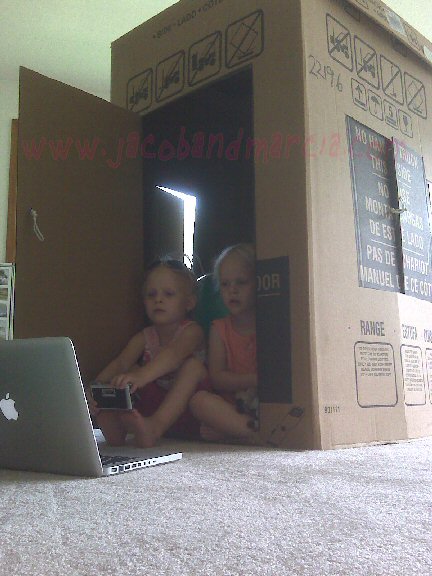 What did they watch?  “Mahana you ugly, get down from that tree!”  “Do you want Johnny Lingo to see what a disobedient daughter you are?” 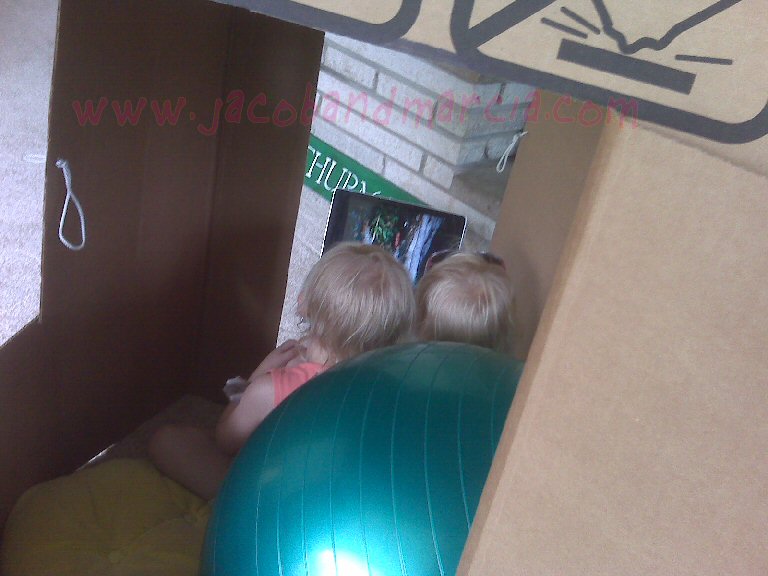 They watched all but the last 3ish minutes of the movie.  Then on to another activity. 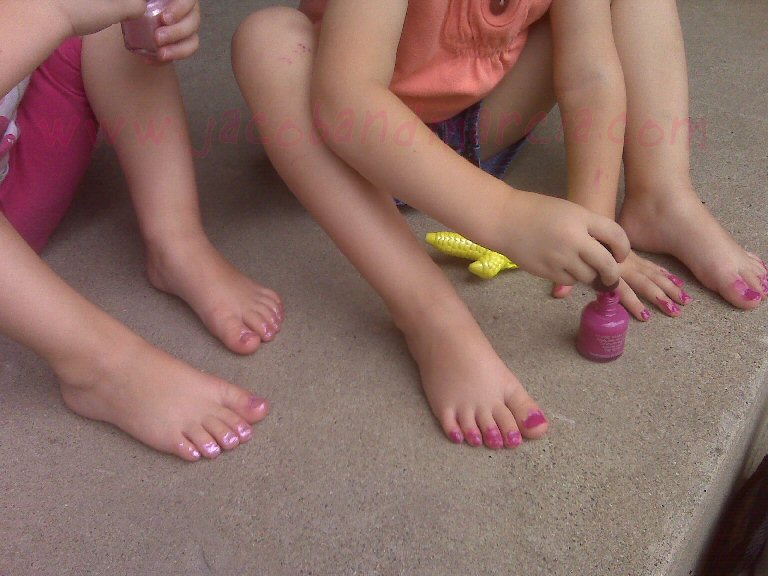 I let them paint their own nails with what ever color(s) they wanted.  They had fun. G3, “Boys can’t paint theirs nails!” 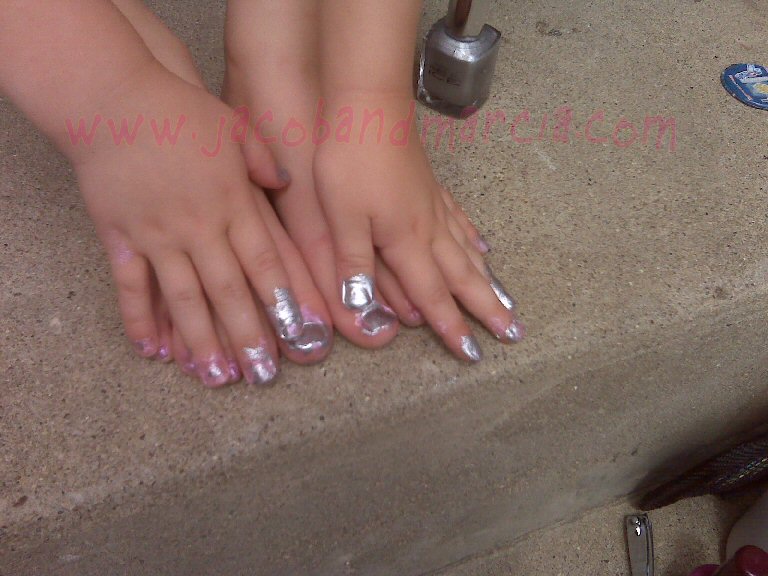 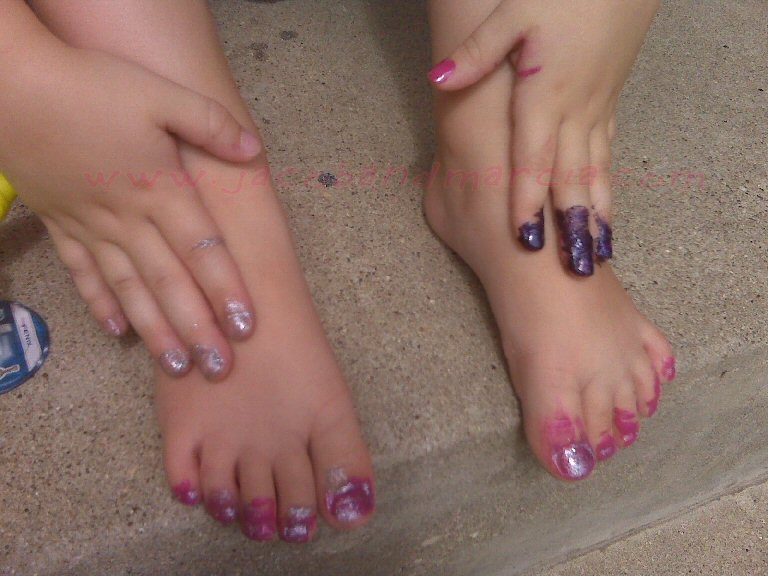 G3 first picture, G2 second picture.  (In case you couldn’t have figured it out by the colors they chose.)  I offered to paint G2’s right thumb nail, but she insisted she did not want that one painted. Well, okay then.

Lunch time, they asked if I would make them oatmeal, because G3 told mee, “Oatmeal is ours favorite food.” 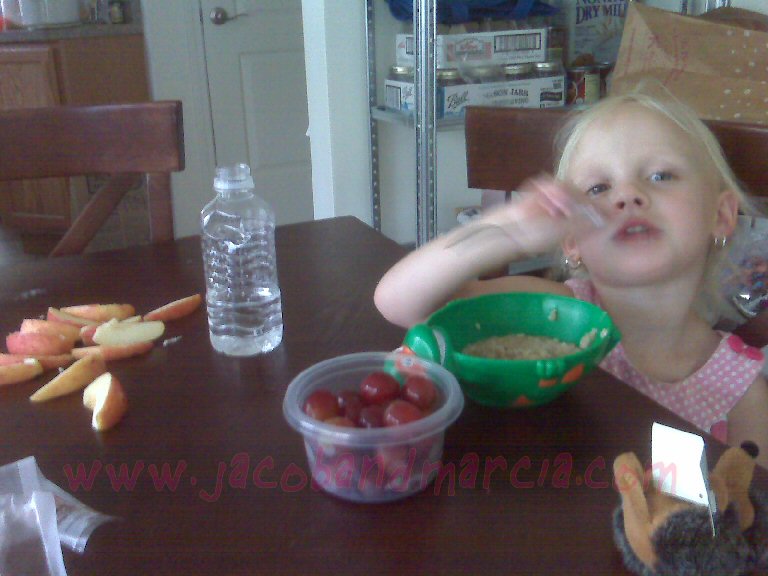 G2 had her apple slices and cheese all lined up-I suspect we are related. 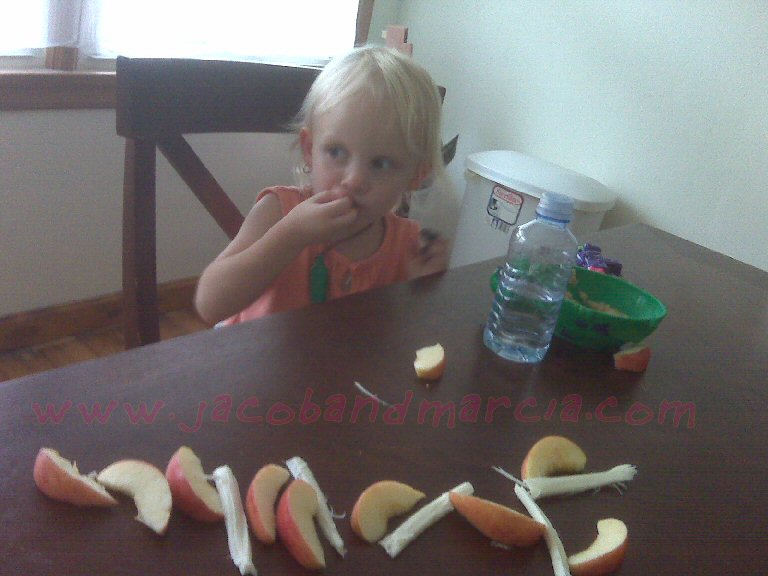 G2 right at the end of lunch told mee, “Marcia, I am tired, I want to lay down.”  I gave her permission, and G3 followed her in and five minutes or so later they were out.  About three and a half hours later they were still sleeping, and this is what we saw. 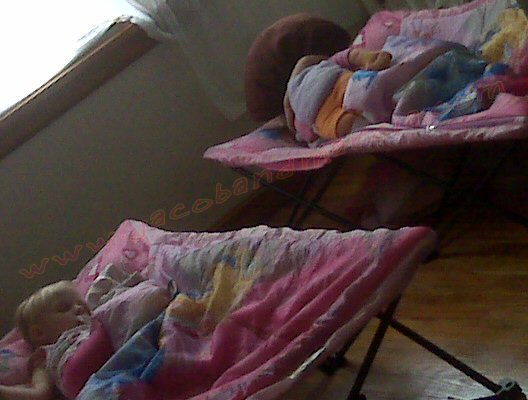 Somehow G2 turned into Dora.  They slept for about four hours and 15-30 minutes.  I guess we did a good job of keeping them entertained.   When they woke up they stayed in there talking for a few minutes and then came out and asked if they could have another bubble bath!  I would have let them if we weren’t headed out the door.  We went over to Jacob’s parents’ house and they had a lot of fun pillow fighting with the adults.  I wish I had taken pictures of that, or even video would have been great!

They went to bed, and before falling asleep double checked with mee that they can walk with mee in the morning with my friend, right?

They walked a mile with us before sitting on the track playing.

I let them take another bubble bath.  They loved that, maybe for a birthday or something they need bubble bath soap.  While making stacks of toys that I let them use in the tub, I heard G2 say to G3, “G3 do you know I love you, you is my best friend.  Don’t put that on mine!”  They got out of the tub just in time to start playing when Grammy, Ronda, G1, and G4 arrived to pick them up.  We all had lunch and then they went on their way.

We really had fun having the girls here, maybe it can become a sort of tradition?  What think you?

7 thoughts on “I want them to go faster and louder”