There are protection/safety/blessings in obeying the rules.  From playing games to laws of the land.  If you think about it, it may sound funny to think of “protection” in keeping the rules if you are say, five years old and playing Candy Land.  Though, there is protection, if you cheat you are likely to be hit (or something similar) by your playmate(s).  Sports, there is potential serious injury or death if any of the players thinks they do not have to keep the rules.  If you cheat in school, you face bad grades or possible expulsion; often times this goes on your “permanent record” and makes it nearly impossible to get into another school.  The basic ten commandments are there for our benefit.  So, as we think about it, there really is safety in keeping the rules.  This includes the high school track.

A friend and I walk in the mornings at the *high school track.  Diana is my fifth (and longest enduring) walking partner in the three-ish years I have been doing this early morning practice.  I have not always had a walking partner, but I find that while I do not like to be in a big group for exercise, it does help to have one other person that keeps mee going.  Sometimes I can handle having a second person, any more than that, and I start to get a wee bit uncomfortable.

Back on topic, we get to the track fairly early, and over the years I have seen many people come and go.  I see most people for less than two months.  This summer however there are two ladies that have been on and off through the summer.  We always greet each other.  I have a story from this Wednesday morning.  In this story I will refer to them as **OSL and ISL, standing for Out of Shape Lady and In-Shape Lady.

Well, Diana and I were walking and we were just past the middle of our second lap, and we heard a voice yell something at us, we did not understand the words, and we both asked, “What?” as I placed my hand up to cup my ear.
OSL:  Could you let us have the inside lane!
Diana:  There is no jogging on the inside lanes.  There is a big sign posted.
OSL:  We are just timing sprints!

I know she felt entitled to request this on Wednesday because they actually arrived a few minutes earlier than we did. ***Normally we are the first people on the track.  Also, OSL and ISL had not been coming for the last three weeks.  When they would go to the track, it was sporadic.  Each time though they would give us dirty looks like they could not believe  we wouldn’t move when we should know to get out of their way.  OSL would grunt at us each time she passed by us and get as close to us as she could, and half of her dirty looks were the stink-eye.  About five weeks ago (two before they took a three week break) ISL arrived after us, but still about five minutes before OSL.  She did some stretches and then decided she would go over and read the posted track rules.  She no longer gave us dirty looks or tried to make us uncomfortable with her body language.  In fact, she would even politely greet us. It is amazing what knowing the rules can do. Here is a picture of the sign posted: 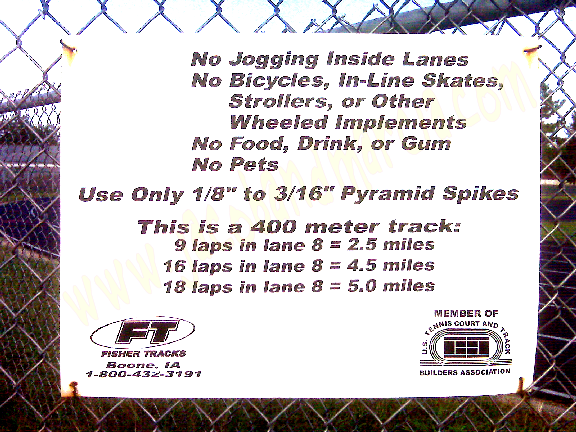 Back to the story:  if it were up to mee alone, we would have stayed put and continued walking in the inside lanes.  However, Diana is a good person.  She suggested to mee that we go ahead and allow them to jog (or sprint jog) in the inside lane.  I didn’t want to.  Because I am stubborn and it is a posted rule.  Diana however, saw a potential lesson in it for OSL if we gave her the lanes after pointing out the rule.  So we moved to a couple outer lanes.

The next time our paths crossed (we were walking the opposite direction from the one they were jogging) OSL yelled out “Thank you!”  We chose not to respond, for a couple reasons. First being that by that point I was ****starting to feel a bit snarky, and my reply would not have been very polite.  Second, I was not about to allow her to think I in any way approved of her actions.  Thirdly, I did not want to give her the validation.  This seemed to bother her, because the following time we crossed paths, she tried to thank us with more explanation as to why she was entitled to do what she wants.

If the rules were not posted (and if it was not common knowledge that joggers/runners leave the inside lanes for walkers on a track), and if she had not been giving us the stink-eye through out each encounter thus far in the summer…maybe, just maybe it would not bug mee so much.  I think it would still bug mee, just not as much.

The other part of her *****sense of entitlement that really gets to mee is that she totally seems to think that she is so much more important and that it is okay for her to break the rules.  And that she thinks nothing of requesting us (not a “please” escaped her mouth) to allow her to break the rules.  And did she even consider our wanting to keep track of how far we walk?  Why does she think we use the track, and everyday the same lanes?  Does it not occur to her that we want to walk a certain distance, and by making us switch lanes mid walk, we no longer have an accurate measuring of the distance?

No, it does not matter to her (or any one else who lives in entitlement-land) what the needs or wants of other individuals may be.

I guess that is why I like/appreciate rules.  They are just what they claim to be.  Following rules keeps us in check, and helps us not step on others’ toes.  What a less thoughtless world this would be (or at least appear to be) if we would all follow the rules out there, and stop looking for ways that they apply to everyone but ourselves.

Jacob suggested that perhaps she may be the bumper sticker driver from here.

* School starts this next week, and we don’t want to have to get up as early as we would have to in order to be off the track so as to not be there after the school day has begun (last year we did it), so we will have to move our walking to the university track, or walk laps around the town square.

** This reference is only to her inability to breathe as she runs/jogs.  She is a fairly small person, she just breathes really hard as she goes around the track, and looks as if she will pass out from exhaustion, doubled over at the end of each lap.  She might be able to breathe better if she would just drink some water and get her mouth/throat wet.

**** Oh we all know I was snarky feeling as soon as she demanded we give her permission to break the rules.

*****Really any person’s sense of entitlement bugs mee.  You don’t get things just because.  You can’t go around demanding things and still have friends (at least not friends that like you).

2 thoughts on “Rules are meant to be followed”