A couple of months ago, I had a dream, which started quite normal.

We were attending a friend’s wedding and we were dressed up pretty nicely.  (In the start of this dream I did not appear to be with child.)  We were asked to go and check on flowers or something to make sure it would be ready for the ceremony to start.  We needed to pass through an indoor pool room to check on what ever the thing was.  As we walked by the pool, some teenage boys decided it would be fun to see if they could get us wet.  Well, when I looked down to see if my dress was wet, I saw something starting to move in my abdomen.  I thought that was odd, I had not eaten recently, so it couldn’t likely be indigestion.  There was stronger movement, and I saw a distinct foot outline on my stomach.  So I got out my camera to take a picture, and before I could push the shutter button, there were 3 strong movements again, and out of my belly popped a foot.  This foot was sticking out past the knee and would not relax.  We searched all over to find any doctors we could, in hopes that they could figure out how to get the leg back where it belongs.  I woke up at this point, with the baby’s leg still sticking out of mee.

When I was awake, I found myself holding my hands as if I was holding the leg, just as I had done in the dream, and there were strong movements/kicks right where I felt them in the dream.  Boy was that trippy!

So, Halloween was this last weekend, and I was trying to think of what I wanted to do for a costume.  Many people gave ideas, some fun, some cheesy, some I was not interested in at all.  I started thinking about how hard it would be to make it look like the alien from Alien.  Then it occurred to mee, I had that dream.  I could sew a leg.  I could make at least one dream become a reality.  So I did. 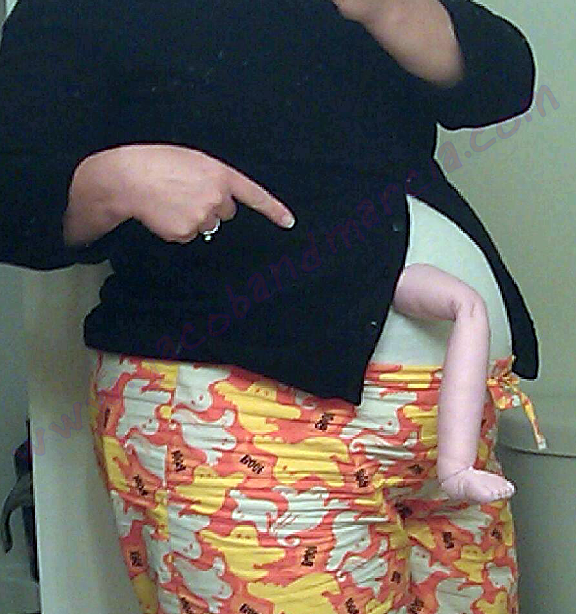 Jacob said there was a little something missing, blood. 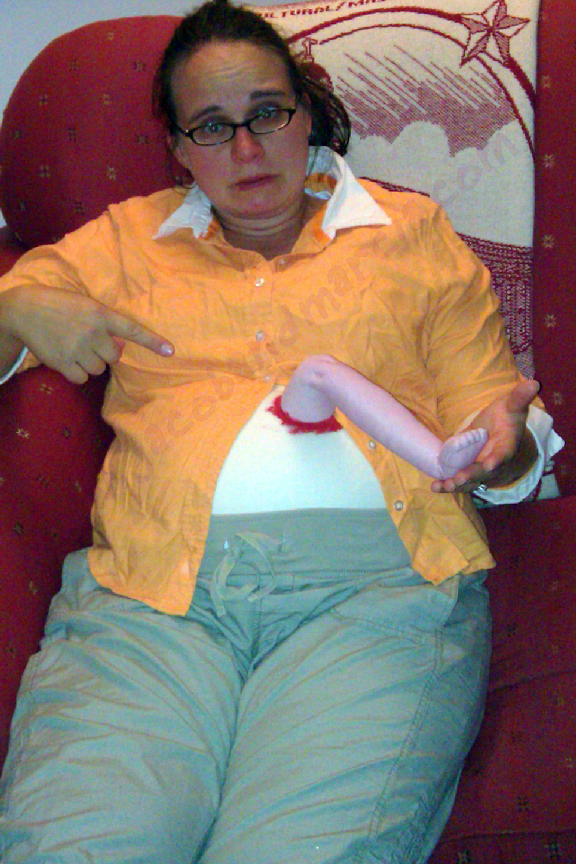 It did seem to add that little extra umph.  The best comment of the night was when a cute kid (not really yelling, but speaking quite forcefully) said, “Why is there a foot in your belly?”  I couldn’t help but laugh as I tried to explain that it is not real.  And even better is that every time I laughed, the leg would kick around.  It was fun!

And because I love him, here is a picture of Husband, and (fake) baby foot*. 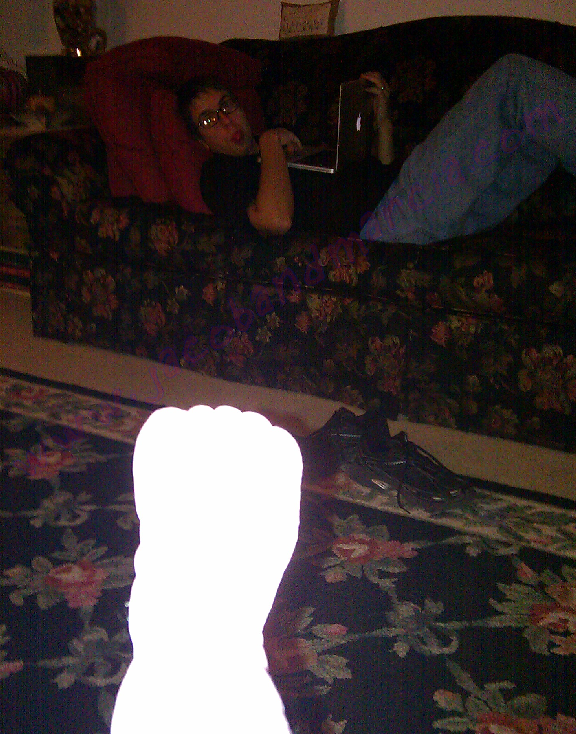 And the weekly count down has arrived again.  35 weeks down, 5 to go.  Here is what is probably my favorite picture from this weeks photo shoot: 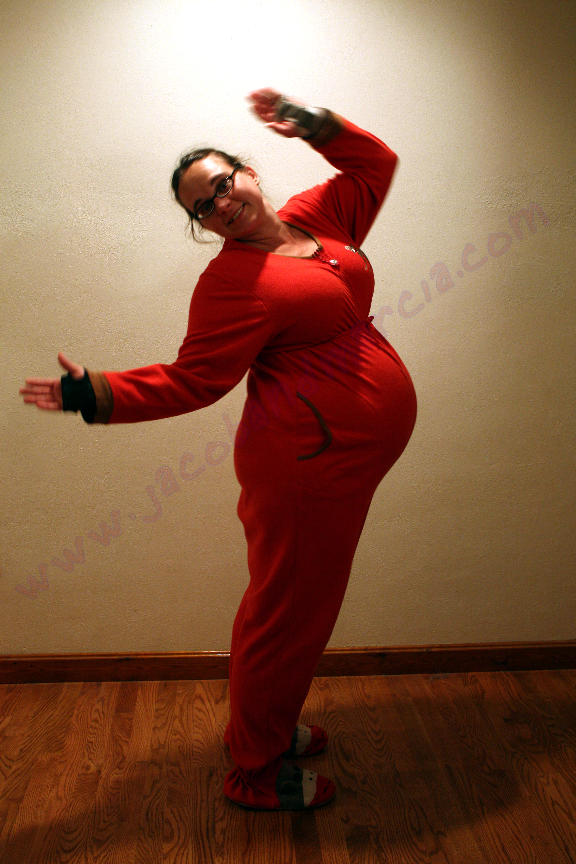 I sure do love my monkey footie pajamas!  Now if only I could find some in Copyright sizes…and if Jacob were willing to wear a pair of them as well, we could have a fun family picture in a couple months.

*Foot is also some times known as fot, this developed when one of the ultrasound pictures, that refused to show us if Copyright is a boy or a girl, was labeled with a fot in stead of a foot.

Only six to go? 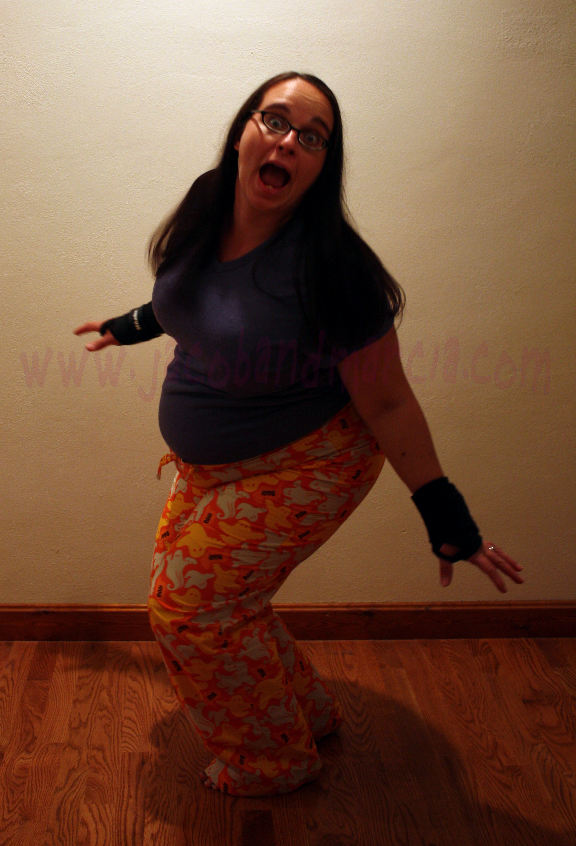 I can’t hardly believe that there are only six more weeks of this.  While it will be nice to have my baby in my arms, I think I will miss the fun stuff that comes with the baby being inside….

I have been busy sewing, and other stuff too, but there has been a good amount of sewing.  Lucky mee, I have pregnancy carpel tunnel syndrome-that they assure mee will end when baby comes out.  For now I wear wrist braces, and it makes it much more bearable.  I have been sewing blankets/quilts, some clothing projects, and I made major progress on my Halloween costume.  Pictures will come later.

And the white ghosts on my pants glow in the dark!

Here is a picture of my current condition.  26 weeks.

Funny story.  A few days ago, I was standing next to Jacob.  He was sitting on his computer chair.  I turned to walk away, and hit him with my belly.  I wonder if I will get used to this belly sticking out so far.  And if I do, I wonder how long it will take to get used to not having such a big belly after Copyright is born.  Time will tell.

Today was a productive sewing day.  I was able to sew a dress, I had already cut it out.  And I was able to turn a t-shirt into a half-shirt (someone makes and sells them as half-tees, I think).  I have heard great reviews on them, and so I decided to make one and see what I think.  I think it will work well for layering.